This biweekly challenge is a:
Colors Challenge 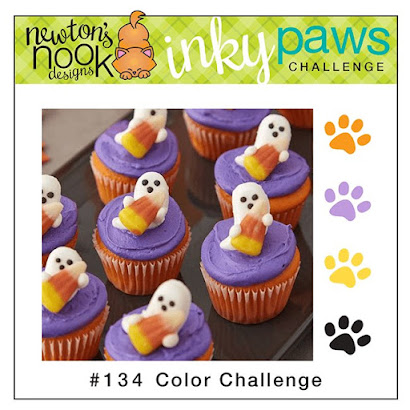 Create a project using the colors-orange, purple, yellow, and black

You have TWO WEEKS to play along - Deadline to enter is Friday, October 23, 2020 at Midnight CST. The winners will be announced on the NND blog the following Monday. 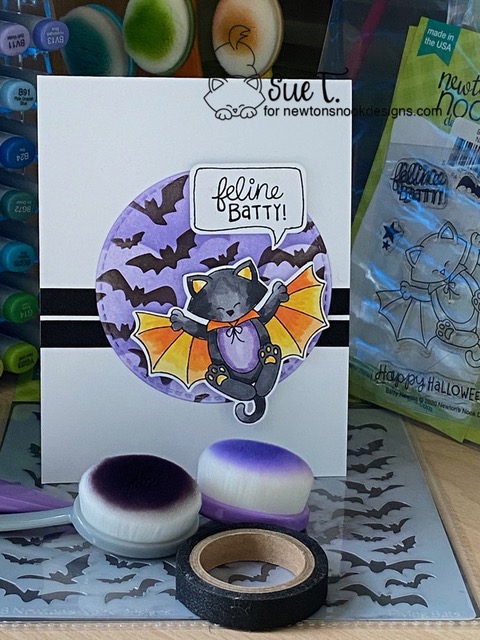 Sue T. is felling batty with this clean and simple Halloween card. On her white card base, she adds two horizontal stripes using black tape.  On her large circle cut using a large circle die from the Circle Frames die set. She creates a purple, cloudy sky using the Clouds stencil and adds a colony of black bats using the Flying Bats stencil. And who is in the middle of those bats?  Newton from the Batty Newton stamp and die set, of course, donning his cute bat costume!  Sue stamps the sentiment on a speech bubble using the Speech Bubbles die set.  She outlines around the bubble to give it a personal touch!  Delightfully done! 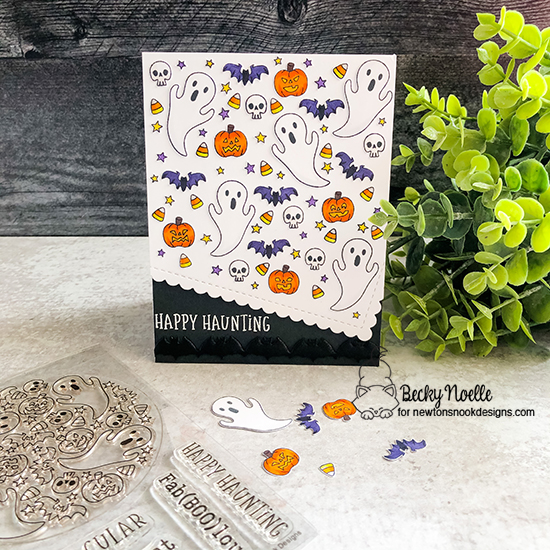 Becky Noelle is back with her amazing fussy cutting skills!  This time she stamps the image from the Spooky Roundabout stamp set twice, colored all the little Halloween spooks and candies before cutting each one out!  She then glues them on her die cut card stock.  She used the scallop-edged die from the Frames & Flags die set. She places this on an angle and adheres to a black card base.  Her white embossed sentiment and black scallop edging are her final touches to this delightful card! 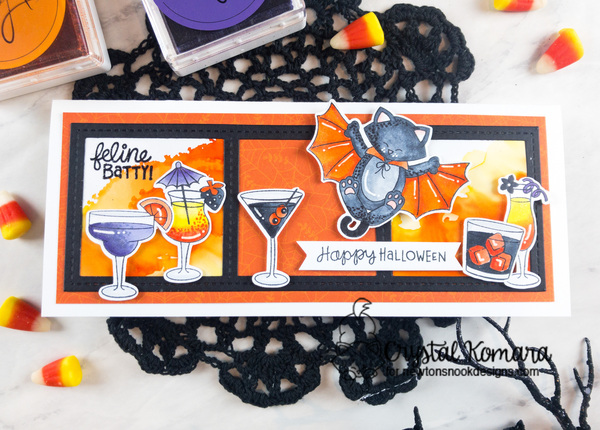 Crystal Komara will wow you with her Halloween cocktails!  They look spook-tacular!  Beginning with a slim card base, she adds an orange background on which she adds her amazing water colored panel. Using the Slimline Frames & Windows die set, she layers a black outline frame with an orange pattern paper panel in the center window.  Using the Cocktail Mixer stamp and die set, she adds an array of cocktails shaded in Halloween colors. Eeek, how fun!  For her finale, she adds Newton
from Batty Newton stamp and die set in all his costume cuteness! 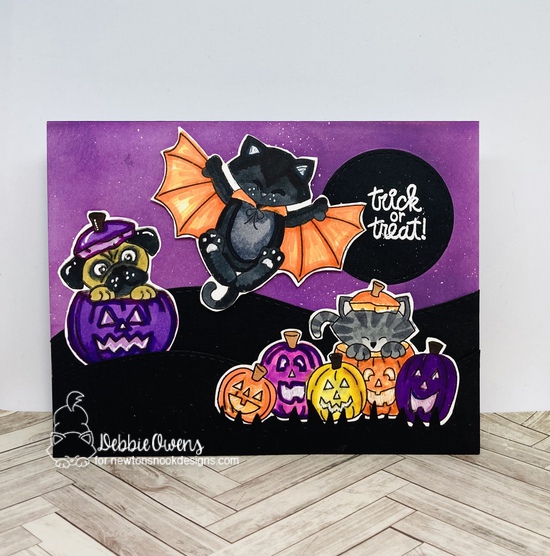 Debbie Owens uses lots of purple!  Beginning with a distressed purple background she lightly splatters on some white. She adds a black landscape by creating grass and hills die cut using the Land Borders die set. Hidden in the tall, black grass, you'll find some colorful pumpkins and a kitten popping out of one. These are from the Newton's Boo-tiful Night stamp set.  To balance her card, she adds the puppy in his pumpkin from the Pug-kin mini stamp set. Flying by the black moon die cut using the circle from the Slimline & Portholes die set is Newton in his vampire costume!  This little guy is from the Batty Newton stamp set!  A spook-tacular scene! 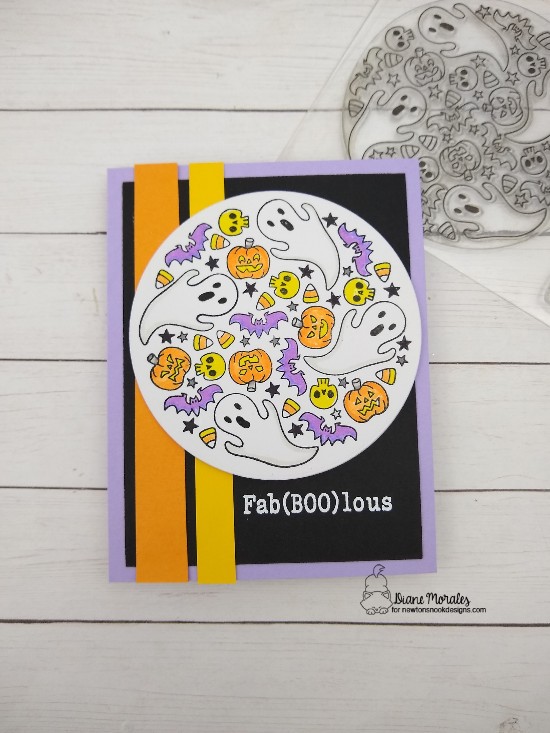 Diane Morales creates a clean and simple Halloween card that is filled with spooky cuteness.  On a lavender card base, she adds a black panel.  Shes an orange and a golden yellow vertical stripes.  For her central element, she uses the Spooky Roundabout stamp set and colors them in lavender, orange, and yellow.  The white embossed sentiment looks striking against the black.  Fab-BOO-lous!

Create a project using the colors--orange, purple, yellow, and black
You are invited to the Inlinkz link party!
Click here to enter
Posted by Indy's Designs at 12:05 AM